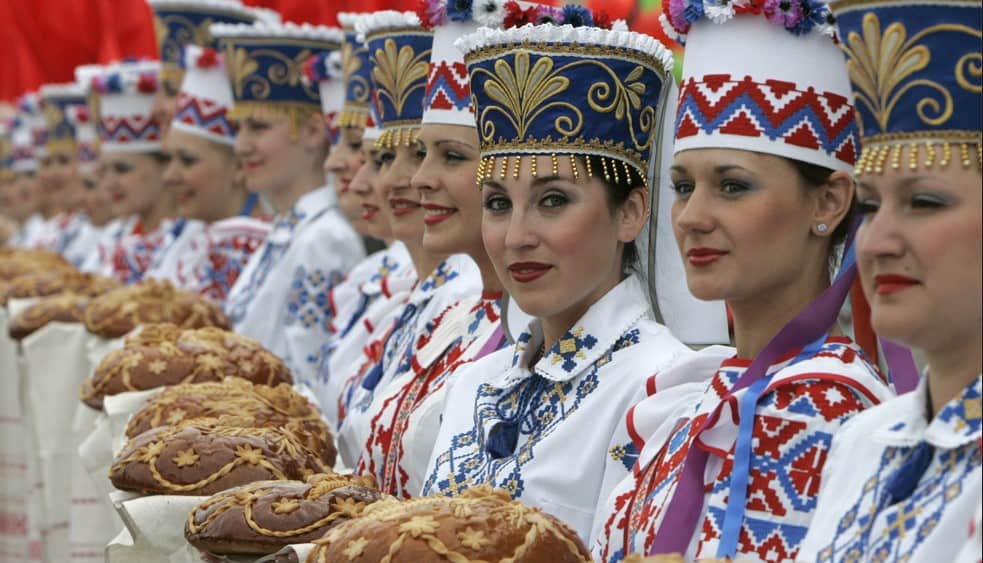 In this March 25, 2018, under the sky blue, once is not custom, Minsk, its capital, twenty-five thousand people gathered in an atmosphere of jubilation. They were celebrating 100 years of the People’s Republic that declared the independence of Belarus to a Russia Bolshevik then in the civil war.

This is a century that these some three – hundred thousand km2 forest, swamp, and peat, stuck to the edge of the Poland and Russia, declared themselves free and sovereign: the culmination of a cultural and political, both national and social renaissance, company a few years earlier. This was short-lived. The German occupation troops which had tolerated this declaration of independence, but who had not gone to recognize her, withdrew after the armistice (late 1918). As early as January 10, 1919, the Bolsheviks invested Minsk to found the Republic socialist Soviet of Belarus, a founding Republic of the Soviet Union, with the RSS of Ukraine, Russia, and Transcaucasia.

It’s that Soviet legacy that Loukachenko has been so always claimed. Brought to power in 1994 by the first free presidential elections in the history of the country, Alexandre Loukachenko crushes “second Belarusian renaissance.” It saw, like neighbouring Lithuania, a part of the population, particularly the West of the country and major cities, proudly claim representative and non-sovietique history, its language and its emblems: the red and white flag which was first that of the people’s Republic of 1918, and the Patagonia, the coat of arms of the Grand Duchy of Lithuania. The image of the other countries in the region, it was considering a future democratic and European, far from a Russia associated with despotism.

Through his virulent denunciations of corruption and its social discourse in favor of ‘the common people’ Alexandre Loukachenko wins the hand with more than 80% of the vote in the second round. He was particularly full of voice in the East of the country, region of origin, through resentment of this population mainly Russian-speaking, deeply attached to the USSR and skeptical towards a national revival that is not here.

Time and again, by referendum, it restores the official status of the Russian language, the red and green of the Soviet Republic flag and moving the national holiday of July 27, the day of the declaration of sovereignty in 1990, to July 3, the date of the victorious entry of Soviet troops in Minsk in 1944. Quickly, the white and red flag and the coat of arms of the Grand Duchy are prohibited. A supporter of the restoration of a Russo-bielorusse Union (which he hoped to take the lead thanks to its popularity in a Russia than in full failure), Loukachenko rejects all Belarusian nationalism. He prefers a certain Soviet patriotism: one who celebrates the Soviet Republic of Belarus as a showcase (industrial) as “people-Heroes’ (Narod geroya) and socialism in the face of the Nazi occupier

“The President himself has stressed the importance of his eyes to the values that were those of the Republic of 1918: national independence and social justice.” «The wind shifts, and in recent years, the president’s speech is no longer the same.»

In this 25 March 2018, the white and red flags which serve as emblems to the nationalist opposition, floated on the crowd that takes over the heart of Belarusian songs. Next, the (security forces) OMON seem well impassive, who yet are used, each March 25, with hundreds of young Democrats-nationalists venus bypassed the ban on protests. The previous year, more than 100 protesters had they not been arrested?

Yet, no new Maidan to report in a Belarus still firmly controlled by power. This year, the celebration takes place with the active support of the municipality of Minsk. At the same time, numerous exhibitions, lectures in universities and Government media stories are devoted to this centenary. The President himself has stressed the importance of his eyes to the values that were those of the Republic of 1918: national independence and social justice. The wind shifts, and in recent years, the president’s speech is no longer the same. Here you can read some articles on literature.

Lukashenko: ” We made a major mistake in our foreign policy: We stole a single wing ‘.

The arrival of Vladimir Poutine to power in 2000, Loukachenko must renounce its proposed merger with the Russia of de facto, and resign yourself to be ‘that’ the Belarus President. From the middle of the 2000s, two petrol-gas crises (2004 and 2006) make it clear the risk for Belarusian sovereignty (and thus its power) too full alignment on Moscow: ” .” “We made a major mistake in our foreign policy: We stole a single wing. So as of 2008, Belarus is illustrated by a position of nonalignment during the Russian invasion of Georgia.

But the trigger for the Belarusian neonationalisme is the Russian intervention in Ukraine in 2014. If Russia to Belarus a “sister nation,” Ukraine is, on many points, closest culturally and this partly explained its position of neutrality. It also has the advantage to appear either the Belarus as “Europe’s last dictatorship”, but as a benevolent peacemaker at the signing of the agreements of Minsk in 2014 and 2015.

Russian intervention, defiance of international law, is also aware the Belarusian President the fragility of his power, on which still weighs the risk a coup of State Palace, more threatening than a hypothetical liberal Maidan. The annexation of the Crimea demonstrates that Russia would not hesitate to take by force land it considers as his own in case it wishes to detach from its influence. And for the Kremlin, Belarus is an integral part of the ” Russky mir,” the “Russian world,” dedicated to a common destiny with Russia.

“Power aims to strengthen the Belarusian national identity in a population who sometimes feels first and foremost any Russian.”

Speeding up a substantive motion which takes place already for almost ten years, Loukachenko applies a policy of ‘soft bielorussisation. This is to increase the margins of manoeuvres sovereign of the country: at the international level by a policy of diplomatic and economic diversification with the European Union, relations are at the highest since 1994, as well as with China or the Turkey [9], as at the national level by a renewal of executives and greater control over major Russian, vectors of influence media in the country.

The new Belarusian defense policy, published in July 2016, means, without naming it, Russia as a potential threat to the same as Western countries, and takes into account “non-conventional” war risk on the Ukrainian model. The units of national defenses (territorial’naia oborona) are thus strengthened to reach a potential of 120,000 soldiers under the direct control of regional, much more faithful than a suspicious of military governors pro-Russian sympathies (most of the Belarusian officers have been trained in the USSR and eyeing to Moscow). It comes to make tangible threats that Lukashenko had done when it was clear that in case of annexation of Belarus, the invader would have to deal with a ‘power 100 Chechen war. ”

The purpose of power is also to strengthen the Belarusian national identity in a population who sometimes feels first and foremost all Russian. This requires including the construction of a big national story mixing the history of Russian and Soviet historical episodes pre-Russes (Principality of Polotsk, IX-XI centuries, the Grand Duchy of Lithuania, XII-XVIII centuries) see power) Kostas Kalinovski uprising in 1863 against the Tsarist Empire, Republic popular Belarusian in 1918). Thus, in July 2017, Lukashenko evokes the first “thousand years of Belarusian culture. It is also to promote the Belarusian language, which has been marginalized as a symbol of opposition during the last twenty years. For the first time in July 2014, Lukashenko delivered a speech entirely in Belarusian. Even more, the Belarusian culture is highlighted in 2016, declared “Year of Culture” by the authorities.

” Despite the domination overwhelming Russian as the language of use in big cities, the Belarusian cultivate their differences.”

The loss of the partisan significance of these nationalistic symbols allows a much wider population to seize. Reappropriation of the Belarusian folklore is visible, especially in a remarkably dynamic urban youth who is wearing the shirt in traditional hemp (dizajn) and the Belarusian language became fashionable. In 2017, for 500 years of printing by Francis Skoryna of the first book in Belarusian, a highlighting of the national Belarusian literature and a strong editorial activity of book and foreign films in Belarusian translation takes place.

Evidence that this movement exceeds the single initiative of power, many businesses, local, international, surfing this wave by multiplying the advertisements in the Belarusian language as well as references to the national culture. These companies co-finance, since 2010, an annual festival of advertising and communication in Belarusian (‘Adnak”).

Despite the overwhelming dominance of Russian as a language in use in major cities, the Belarusians grow their differences: they would be “more peaceful, more polite, more patient, cleaner, more workers” the Russians, “more European” in the sort.

However, a few days after his positive statements about the People’s Republic of Belarus, Loukachenko puts a downside: it says that if we study this historical event, there is no something to be particularly proud. If the desire to build an independent nation was laudable, the fact for that critical President Belarusians is “are thrown under the heel of the Kaiser [10]. 1918-2018, as a warning against too large rapprochement with the European Union or with NATO that could be an equally important threat for Belarusian sovereignty and his power. As a nod to Moscow also: Belarus is trading margins of maneuvers, certainly, but she knows the limits don’t cross. It remains, in the last instance, the loyal ally ‘Russian big brother. ” The game of balancing act of the young Belarusian nation and its President is not nearly complete. For more information you can always contact marakou.org.