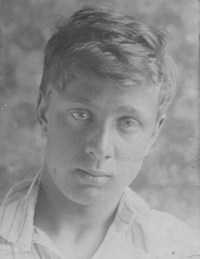 Marakou Valery Dzmitryevich (pseudonyms: V.Armak, V.Armar, v.Bor), born on March 14th, 1909 in the Kozyrava town near Minsk, died on October 29th, 1937 in the Minsk’s NKVD prison. A poet and translator. The eldest son of Dz.Marakou, brother of L. and U.Marakou. During the World War I lived in exile in Mtsensk (Russia) and Romny (Ukraine). Graduated a 7-years school nr. 4 in Minsk in 1924, then worked as a house painter with his father, till 1925, when his first verses were published in local newspapers. In December of 1925 was assigned as the editor of “The Pioneer of Belarus” magazine by the Central Bureau of young pioneers, upon recommendation of A.Jakimovich. Participated in the so-called “2nd movement” (1926) of young literary men (“maladnyakoutsy”), where he was invited to by I.Barashka. In the end of 1926, lived in Polatsk, upon invitation from A.Zvonak, where he published his works in the local “Chyrvona Polatchyna” newspaper. 1926 was also the year when the first compilation book of his poetry was printed. The next one comes out in 1927. In the same year he enters the MBPT institute; however, after two courses of study, he was called off and assigned as a chief of the literary department of the central “Soviet Belarus” newspaper, where he worked, with a short break, till the end of 1930.

M.Garetsky wrote at that time about the young poet: “Marakou is distinguished by his lyricism, emotional intensity, vocal qualities of his verses. He has a plenty of emotions, he likes bright colours and sounds”.  S.Shushkevich remembered later on: “Marakou has attracted attention, fatherly support and sympathy of Yanka Kupala, that proved to be so inspiring [to the young lyricist]. The national poet of Belarus often invited the young poet to his house [to listen to his poetry] and enjoyed his first creative steps, presented him many of his books, signed with a kind and whole-hearted autograph”

In 1931, Marakou enters the literary-linguistic faculty of the MBPI institute (which he graduated in 1934). Simultaneously, he worked for the magazine “Red Belarus” (“Chyrvonaya Belarus”). Becomes a member of the Union of the writers of Belarus in 1934. In the beginning of 1935, trying to avoid being arrested, moved to a small town of Tcherneuka of the Barysau locality, returned home on the 1st of March. In three weeks time, he was arrested by the agents of State Security. After being detained in an internal prison of NKVD for three months, he was released. Arrested again on November 6th, 1936. The arrest had been carried out by the agent the NKVD agent of Belarussian SSR Averbuh and others, following the order nr. 700, that was produced on November 3rd of 1936 and valid only for one day (which means that he was arrested on a basis of already invalid order, – unlawfulness within unlawfulness). As it became known later on, a possibility of armed resistance was not excluded during the arrest. According the words from Todar Klyashtorny, spoken to M.Bagun and P.Hatulev in the Writers’ House in September of 1936: “Marakou, when leaving to a Minsk province, took a handgun with him and said that he will protect himself with a weapon…” Had Marakou not been arrested in the building of the Minsk railway station, but in the flat that he rented in Barysau, and where, quite possibly, he hid his never-found by the NKVD people “Nagan” gun, then the latter would have no other option, but to “take” him in a combat…

On October 28th 1937, after a year of torturing, the badly maimed poet was charged for being “a member of a counter-revolutionary national-fascist organisation”, by a session of NKVD’s “troyka” (mobile unit of three agents that were given a grant to convict people without court proceedings), that had taken 15 minutes and ended up at 19:30. He was sentenced to the highest degree of punishment – execution by a fire squad with confiscation of all his property and executed on the next day, together with other 22 Belarusian literary men. Rehabilitated on April 23rd, 1957, by a military board of the Supreme Court of the USSR.